Trump Policy Travails Could Boost the Appeal of Asia's Markets

EghtesadOnline: It’s becoming increasingly clear that President Donald Trump will face difficulties implementing his agenda, despite the “unified” Republican control of the executive and legislative branches of government. That agenda included protectionist moves against countries enjoying trade surpluses with the U.S. -- and many of those are in Asia.

The dollar’s weakening in the wake of Trump’s legislative flop could also reduce the impetus for his Treasury to label China and other Asian countries as exchange-rate manipulators that cheapen their currencies for mercantilist gains. Also consider that Asia remains the world’s fastest-growing region, and there might be good reason for outperformance of the its equities, Bloomberg reported.

“I don’t think we will see a total risk-off sentiment from here as the economy remains sound in the U.S. and the risk sentiment will also recover” after the health-care fracas, said Koji Fukaya, Tokyo-based chief executive officer at FPG Securities Co. “This also may mean the dollar and the U.S. interest rates won’t climb significantly, which in turn is positive for the emerging-market assets.”

For now, Asian stocks are down in sympathy with U.S. stock futures. The concern: the health-care fiasco spells trouble for Trump fiscal policies that were expected to boost American growth and with it the global economy. Bonds rallied, given the potential for slower U.S. inflation and less need for accelerated Federal Reserve interest-rate hikes.

That said, several Asian markets were doing better than the U.S. S&P 500 stock-index futures, in a pattern that’s become evident in recent weeks as seen below: 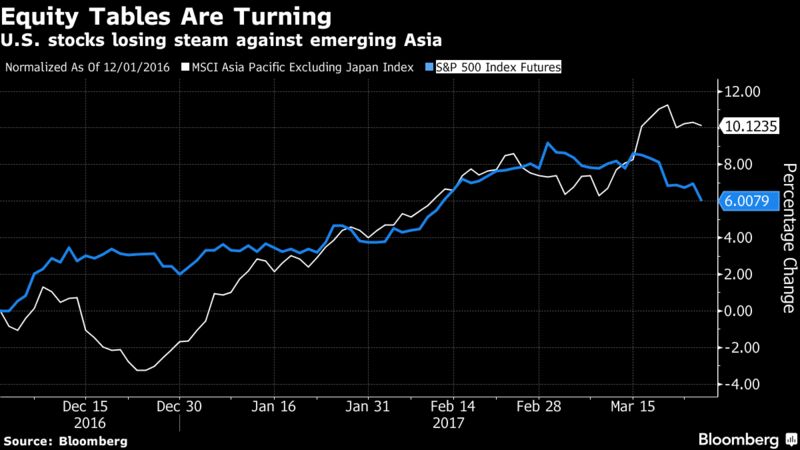 “A pullback in U.S. equities resulting from the health-care-bill failure would give Asian markets a good reason to take profit after three months of non-stop rallying,” said Margaret Yang Yan, a market analyst at CMC Markets in Singapore. “A weaker U.S. dollar will also alleviate emerging-market outflows amid the rate-hiking cycle, thus be positive to EM in general,” she said, though it poses a challenge to exporters in China and Japan.

Investors will need to keep close track on how policy making develops from here in the U.S., including on a proposed border-adjustment tax that would penalize imported goods. Any sign of an emerging consensus on the idea "is likely to pose a headwind" for developing markets, Citigroup Inc. economists wrote.