EghtesadOnline: The bullish sentiment following OPEC’s deal is almost all gone. Hedge funds haven’t been so skeptical on rising West Texas Intermediate crude prices since Nov. 29, the day before the cartel agreed to cut output, according to U.S. Commodity Futures Trading Commission data.

Their net-long position, or the difference between bets on a price increase and wagers on a decline, has dropped 37 percent from a record touched last month as American crude production climbed, sending inventories to an all-time high, according to Bloomberg. 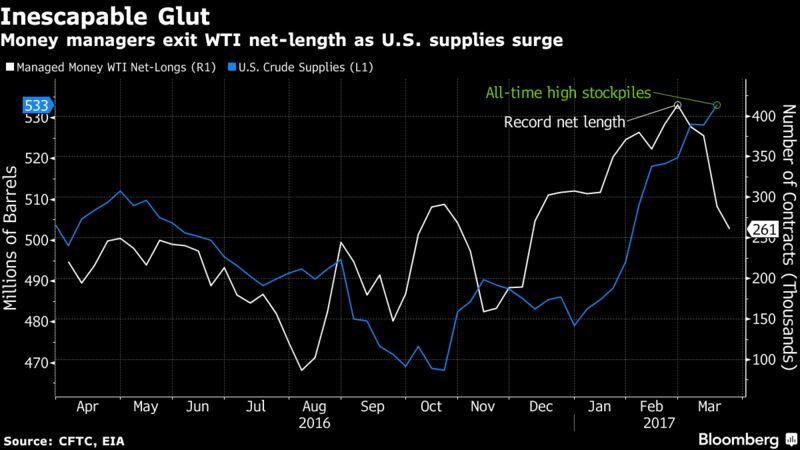 "Things trend, and sentiment from the hedge funds has turned bearish," Mike Wittner, head of commodities research at Societe Generale SA in New York, said by telephone. "People rushed into the market and their patience ran out, so they ran for the exits. They need a strong signal, and that will be U.S. stockpile draws, probably a few in a row, before they return."

"This is a market that’s very much on the defensive," Tim Evans, an energy analyst at Citi Futures Perspective in New York, said by telephone. "Although net length is greatly reduced, money managers still have a lot of net length. They still remain vulnerable to further price declines."

The agreement between the Organization of Petroleum Exporting Countries and 11 non-OPEC producers to cut output for six months starting Jan. 1 helped spur a wave of buying. That optimism has crumbled with the resurgence of U.S. drilling rigs and mounting stockpiles in the world’s biggest crude consumer.

U.S. crude stockpiles rose to 533.1 million barrels in the week ended March 17, the highest in weekly data going back to 1982, according to Energy Information Administration data. Production climbed to 9.13 million barrels a day, the highest since February 2016. The nation’s active oil-rig count has more than doubled since May to 652 last week, according to Baker Hughes Inc.

"The whole market is fixated on U.S. inventories," Rob Thummel, a managing director and portfolio manager at Tortoise Capital Advisors LLC who helps manage $17.2 billion, said in an interview. "We should start to see them fall as early as early April. When we see that, prices will move back into the $50s."

Part of the glut in U.S. stockpiles stems from a surge in imports last month. Arrivals into the country reached the highest level in more than four years in the week ended Feb. 3 as barrels that were pumped before OPEC and its partners made cuts arrived at U.S. ports. These shipments will probably slip in the weeks ahead, according to Thummel.

U.S. refineries typically increase activity in April as they finish maintenance before the summer peak driving season. Crude processing volumes have increased in the second quarter in each year in EIA data going back to 1989.