EghtesadOnline: The dollar extended its decline and stocks fell as investor doubts grew that U.S. President Donald Trump will be able to implement his economic agenda. European bonds and gold advanced and industrial commodities dropped.

The greenback was on the verge of erasing the rally spurred by Trump’s election victory, falling against all of its Group of 10 peers after the president and Republican legislators failed to proceed with health-care reform Friday. U.S. equity index futures suggested stocks would retreat for the seventh time in eight days, while European shares slumped. Oil slipped and iron ore futures paced losses in raw materials, while havens including the yen climbed, Bloomberg reported. 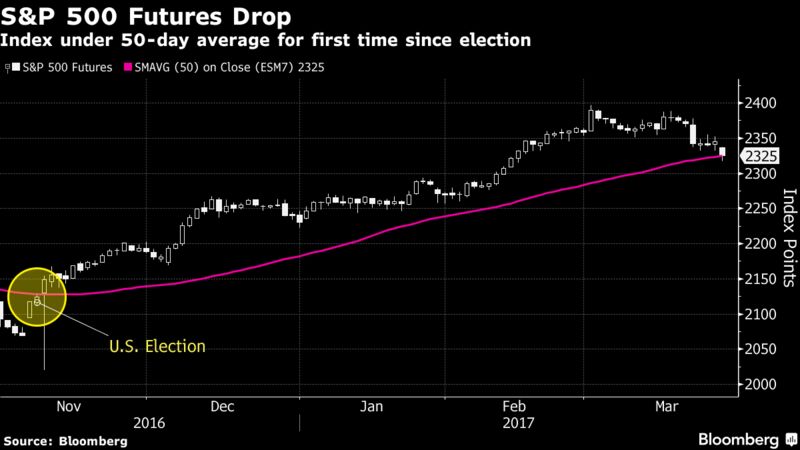 Trump’s inability to push through his flagship health-care bill has derailed investor hopes that his pro-business agenda -- featuring tax cuts and regulatory changes -- will enjoy a smooth passage through Congress. Reflation trades sparked by his election are faltering, with the dollar retreating and the S&P 500 Index headed for its worst month since October.

“Trump’s failure to get the health care bill through a Republican majority led Congress has raised some concerns about the President’s ability to implement his agenda of cutting taxes and raising infrastructure spending,” Ole Hansen, chief commodity strategist at Saxo Bank, said by email. “Failure would deflate further the months-long rally in stocks while reducing the need for further Fed action. The result of this has seen the dollar, stocks and bond yields lower which are all good news for investors looking for gold as an alternative.”

Here are this week’s key events: