Turkey to Suspend Plan to Sell $10 Billion of Seized Firms

EghtesadOnline: Turkey put on hold a plan to sell almost 600 companies worth about $10 billion that were seized in the aftermath of a failed military coup, according to two people with knowledge of the matter.

It’s not clear whether the Istanbul-based Savings Deposit Insurance Fund, known as the TMSF, will ever go ahead with the sales because of concern over legal battles regarding their ownership, the people said, asking not to be identified because the plans are private.

According to Bloomberg, the companies form part of the more than 850 firms confiscated by the government last year and which have assets that are estimated to be worth a combined 48 billion liras($13.2 billion). All of the companies were taken over for their alleged support of self-exiled Pennsylvania-based cleric Fethullah Gulen, who President Recep Tayyip Erdogan accused of plotting the failed coup last July. Gulen has denied any involvement in the botched takeover.

Turkiye Sinai Kalkinma Bankasi AS, or TSKB, Vera Varlik Yonetim AS and Garanti Yatirim Menkul Kiymetler AS were picked to advise on the sale in December. The fund hasn’t held any meetings with the advisers on strategy since nor has it signed a contract on the mandate to advise the sale process, the people said.

Turkey gave the authority over any transaction regarding the companies seized by TMSF to Deputy Prime Minister Nurettin Canikli, according to a government decreepublished in the Official Gazette on Jan. 6.

A TMSF executive, who asked not to be named because of corporate policy, said Canikli’s office will decide on the fate of the seized companies, limiting TMSF’s role. TMSF-appointed trustees will continue managing the companies until the courts decide on whether their owners supported the Gulen movement, Canikli said on March 16.

The confiscated entities include three commodities-related companies owned by Turkish businessman Akin Ipek, such as gold miner Koza Altin Isletmeleri AS and coal and power producer Ipek Dogal Enerji Kaynaklari Arastirma ve Uretim AS. Other companies that feature on the list span industries from construction and energy to carpet making.

Ipek, in self-imposed exile in London, vowed a court challenge if the government in Ankara sells the assets it seized from him after the failed coup. 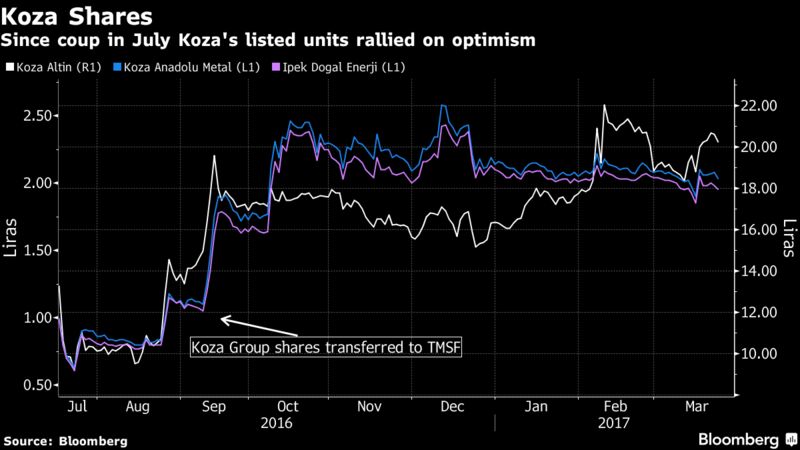 Shares of Ipek’s three publicly listed companies fell on Thursday. Gold miner Koza Altin declined as much as 4.1 percent in Istanbul, while Koza Anadolu Metal Madencilik Isletmeleri AS and Ipek Dogal lost as much as 3.4 percent and 3.5 percent, respectively.