EghtesadOnline: Oil dropped as U.S. crude supplies rose to an all-time high while investors await a meeting between OPEC and its allies that may signal whether they’ll extend output curbs.

Futures fell on both sides of the Atlantic, sending Brent to its lowest close since November. American crude output continued to rise along with inventories last week, an Energy Information Administration report showed on Wednesday. While OPEC won’t formally decide until May whether to prolong production cuts, officials will meet this weekend in Kuwait to discuss their deal’s progress, according to Bloomberg. 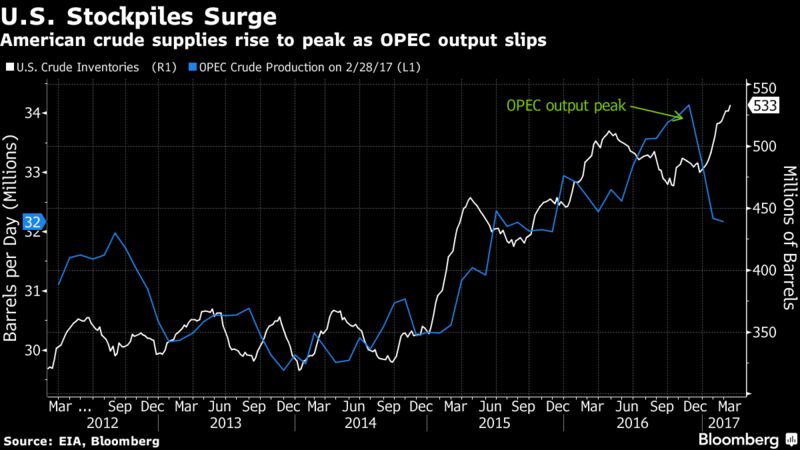 West Texas Intermediate and Brent crudes dipped below $50 a barrel this month for the first time in 2017 as rising U.S. inventories weighed on output cuts by the Organization of Petroleum Exporting Countries and other producers. Saudi Energy Minister Khalid Al-Falih has said the group would extend the deal if oil stockpiles remain high. The Russian cuts are “slower than what I’d like,” Al-Falih said in an interview with CNBC March 7.

"There’s a lot weighing on the market and I believe it’s a matter of time before we move lower," John Kilduff, a partner at Again Capital LLC, a New York-based hedge fund that focuses on energy, said by telephone. "Saudi patience is being tried by Russia and others that aren’t abiding by the agreement."

WTI for May delivery dropped 34 cents to close at $47.70 a barrel on the New York Mercantile Exchange. Total volume traded was about 20 percent below the 100-day average. Prices are up 20 percent from a year ago.

Brent for May settlement fell 8 cents to $50.56 a barrel on the London-based ICE Futures Europe exchange. Its the the lowest close since Nov. 30. The global benchmark ended the session at a $2.86 premium to WTI.

Crude supplies rose by 4.95 million to 533.1 million barrels last week, the EIA report showed on Wednesday. Prices tumbled upon the release of the data before erasing most of the loss as attention shifted to fuel stockpile gains. Gasoline inventories fell to 243.5 million barrels, while supplies of distillate fuel, which includes diesel and heating oil, slipped to 155.4 million barrels.