EghtesadOnline: U.S. stocks slipped with European equities as oil fell toward $48 a barrel, with investors digesting fresh signs that the U.S. intends to rewrite the terms of global trade. The dollar and Treasuries were little changed.

Crude’s ninth retreat in the past 11 days dragged oil and gas producers lower, putting the the S&P 500 Index on track for a third straight slide. Yields on 10-year Treasury notes held near 2.50 percent. The pound fell, reversing earlier gains, after the U.K. said it will trigger the process to leave the European Union on March 29 . Gold touched the highest level in two weeks, Bloomberg reported. 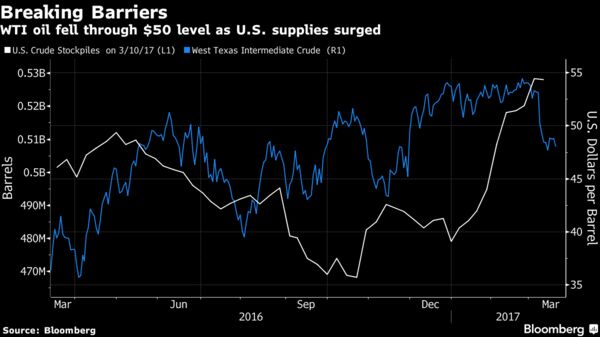 Investor focus on Monday turned to the outcome of a Group of 20 meeting, where finance ministers locked heads before issuing a statement that dropped a reference to resist all forms of protectionism. That’s renewing concerns about the U.S. president’s desire to pursue new trading terms. The U.S. currency slumped last week after the Federal Reserve delivered a more dovish message than expected, even as it raised interest rates.

“As the world’s Nr. 1 is preparing to set significant barriers against the world, investors are increasingly worried,” Ipek Ozkardeskaya, a market analyst at London Capital Group, wrote in a note. “The uncertainties regarding the U.S.’s relationship with the rest of the world” are weighing on equity traders’ sentiment, he said.

What’s coming up this week: