EghtesadOnline: Oil fell as U.S. drilling continued to rise, undermining the potential for even an extended OPEC output-reduction deal to rebalance the market.

According to Bloomberg, futures lost as much as 1.7 percent in New York after gaining 0.6 percent last week. Producers added more oil rigs to U.S. fields, extending a drilling surge into a 10th month, Baker Hughes Inc. said on Friday. Saudi Arabia is ready to extend cuts if supplies stay above the five-year average, Energy Minister Khalid Al-Falih said in an interview on Bloomberg Television last week. 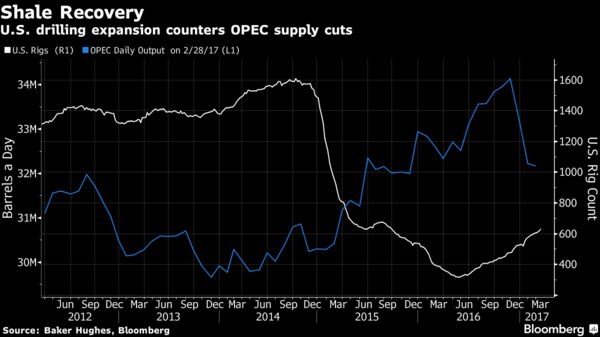 U.S. oil this month dropped below $50 a barrel for the first time this year as the nation’s near-record crude stockpiles and increasing production weighed on the output reductions by the Organization of Petroleum Exporting Countries and its allies. While OPEC won’t decide until May whether to prolong the curbs, energy ministers including Russia’s Alexander Novak will meet this weekend in Kuwait to discuss the deal’s progress.

“The solid weekly gain in U.S. oil rigs continues and the market sees that,” said Bjarne Schieldrop, chief commodities analyst at SEB AB in Oslo. “OPEC can easily shoot itself in the foot if the cuts lift the long-dated WTI price, which will drive U.S. shale yet higher and stronger.”

West Texas Intermediate for April delivery, which expires Tuesday, fell as much as 81 cents to $47.97 a barrel on the New York Mercantile Exchange and was at $48.18 as of 11:43 a.m. in London. The more-actively traded May contract dropped as much as 1.5 percent. Total volume traded was about 12 percent below the 100-day average.

Brent for May settlement declined as much as 72 cents, or 1.4 percent, to $51.04 a barrel on the London-based ICE Futures Europe exchange. Prices last week gained 0.8 percent to end at $51.76. The global benchmark crude traded at a premium of $2.55 to May WTI.

U.S. drillers boosted the rig count by 14 to 631 last week, data from Baker Hughes showed. They have added 106 machines to fields this year. The nation’s crude output has climbed to 9.1 million barrels a day, the most since February last year, according to the Energy Information Administration.