OPEC's Best Signal of Success No Longer Looks So Promising

EghtesadOnline: When OPEC announced production cuts last year, the most reliable indicator of oil-market supply started signaling a shortage ahead. Now it’s pointing the other way.

In the weeks after OPEC’s Nov. 30 agreement, shorter-term oil prices began to strengthen versus longer-term contracts amid expectations the group’s output cuts would cause a shortfall this year. That trend is reversing on growing concern the curbs aren’t enough to clear the surplus in world oil inventories.

According to Bloomberg, oil prices have slumped below $50 a barrel for the first time this year as record crude stockpiles and rebounding production in the U.S. suggest that the curbs by the Organization of Petroleum Exporting Countries and Russia aren’t working fast enough. 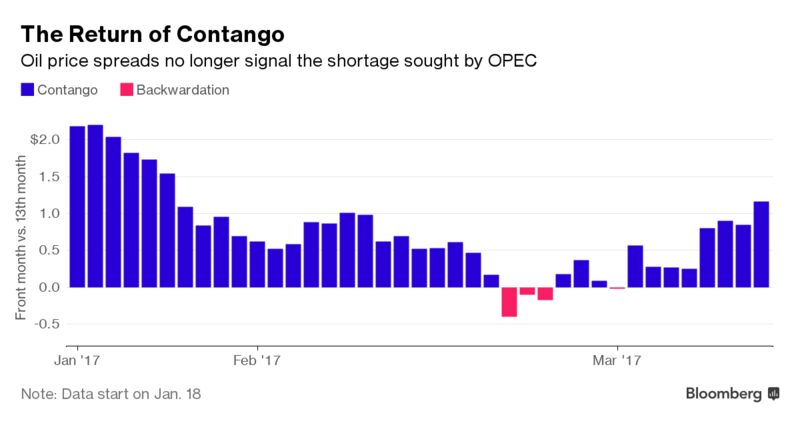 In January, front-month Brent crude futures narrowed their discount -- known as contango -- against contracts for the following year on expectations the supply curbs would succeed. By Feb. 21, the front-month had developed a premium over the year-ahead contract, a situation known as backwardation. Last week, the contango strengthened again.

“The market has started to doubt that OPEC will prolong the cut deal into the second half of 2017 and hence maybe the stock draws that would follow will not happen,” said Torbjorn Kjus, chief oil analyst at DNB Bank ASA in Oslo. “Hence, backwardation is changing to contango for that part of the curve.”

Saudi Arabian Energy Minister Khalid Al-Falih told a conference in Houston last week that the kingdom hasn’t yet decided whether OPEC should prolong the output curbs once they expire in June. Kuwait, while agreeing it’s too early to decide, would back an extension, according to comment by Oil Minister Issam Almarzooq reported by news agency Kuna.

A move to backwardation was among the criteria Al-Falih listed for deciding whether the measures are working. Whereas contango rewards traders for amassing inventories that will be worth more in future, backwardation would encourage them to deplete those stocks and clear the surplus. 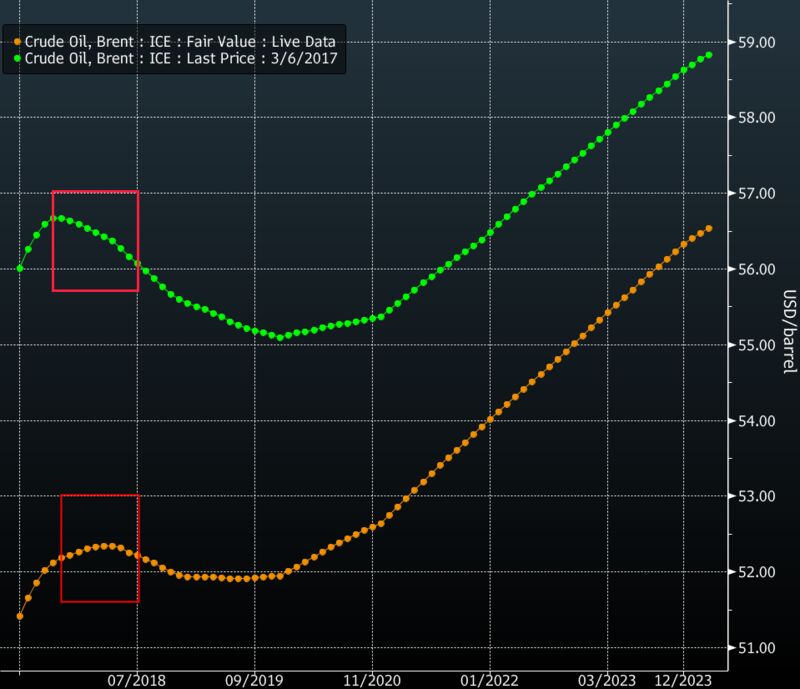 “OPEC needs to get the curve backwardated for this rebalancing to happen,” said Amrita Sen, chief oil analyst at Energy Aspects Ltd. in London.

Another key indicator that showed OPEC was making progress -- the price difference between the Middle East’s Dubai crude benchmark and Europe’s Brent -- has also faltered. It was last at $1.56 a barrel, having narrowed to $1.20 in late February, according to data from brokers PVM Oil Associates Ltd.

Still, even as prices slide banks including Goldman Sachs Group Inc., Bank of America Corp. and Morgan Stanley say the re-balancing remains on track and inventories are poised to decline. Both Brent and U.S. benchmark West Texas Intermediate crude are headed for a “steep” backwardation, Bank of America said in a report.

A committee of five oil producers appointed to oversee implementation of the curbs will meet in Kuwait on March 25 to review progress so far. OPEC ministers meet in May to decide on whether to prolong the deal.

Market signs so far aren’t working in the group’s favor, according to Commerzbank AG.

“The fundamentals are not looking good,” with increasing oil inventories and a swift rebound in U.S. production threatening to send prices below $40 a barrel this summer, said Eugen Weinberg, the bank’s head of commodities research in Frankfurt. “It’s becoming clearer that the decision made by Saudi Arabia last November was a policy mistake.”