EghtesadOnline: Asian stock markets were mostly higher in thin trading as investors assessed the prospects for further gains after a rally leading up to a near-certain U.S. interest-rate increase.

The Aussie dollar and stocks in Sydney maintained gains as the Reserve Bank of Australia kept rates at a record low. South Korean and Hong Kong-listed Chinese stocks posted the biggest increases among equity gauges, with trading volumes down across the board. JPMorgan Chase & Co. warned that hawkish Fed rhetoric has increased the likelihood for a short-term pullback after stocks reached records last week. The dollar slipped after Monday’s advance, Bloomberg reported.

Global stocks this month climbed to a record high amid bets the U.S. economy is strong enough to withstand a rate hike this month that Federal Reserve Chair Janet Yellen has all but assured investors will happen. Chinese Premier Li Keqiang warned of larger challenges ahead during his work report to the annual National People’s Congress gathering in Beijing. In Europe, politics has become the main market driver as populist candidates come to the fore amid election campaigns in the Netherlands, France and Germany.

“The market’s already mostly priced in a March rate hike,” said Kiyoshi Ishigane, chief strategist at Mitsubishi UFJ Kokusai Asset Management Co. “But we’re yet to see what the latest non-farm payrolls data look like. Also the market has yet to figure out what path beyond March the FOMC will be taking.” 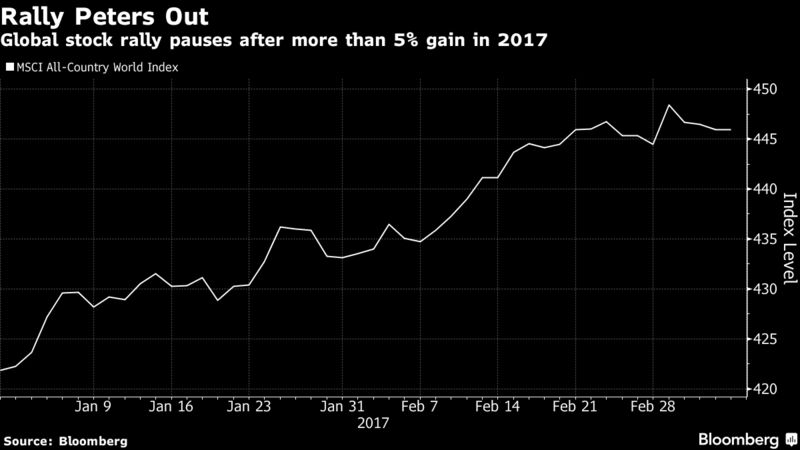 What’s ahead for the markets: