The Trump Trade Threat Could Unite the Rest of the World, EU Official Says

Jyrki Katainen, a vice president of the European Commission, the EU’s executive arm, said Trump’s rejection of multilateral commercial deals and border-tax threat are giving impetus to the 28-nation bloc’s push for free-trade or investment pacts with countries including Japan, China, India, Saudi Arabia, the United Arab Emirates, Mexico, Brazil and Argentina, according to Bloomberg.

“When there has been some signals to raise protectionism, especially from the U.S. side, the rest of the world seems to be fighting back and saying that this is not our line, this is something which we don’t want,” Katainen, 45, said in Bloomberg Television interview in Brussels. “This is music to our ears.”

The comments signal that Trump’s “America First” approach that seeks to reduce the U.S.’s $502 billion trade deficit may be as much an opportunity as a threat to the EU. The bloc is seeking renewed impulse as it grapples with challenges such as the U.K.’s planned departure from the EU, the demise of talks with Washington on a free-trade pact, Russian meddling in eastern Europe, surging populism and an influx of refugees. 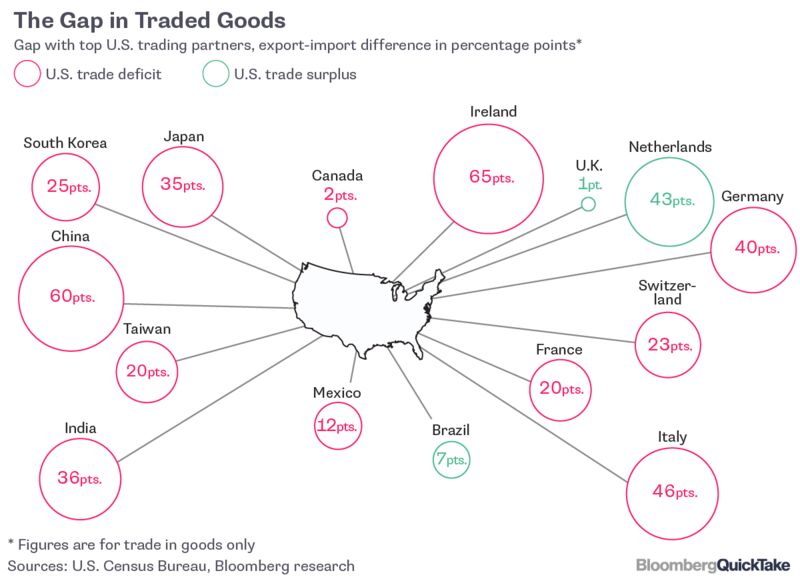 Katainen, a former prime minister of Finland now in charge of the jobs, growth and investment portfolio at the commission, said the EU’s “No. 1 priority” with the Trump administration is “to settle down all the tensions and try to create as smooth a trade relationship as possible” between the world’s two biggest economic partners.

He declined to speculate about the risks of greater commercial disputes with Washington, saying “there’s very little on paper yet” from the new U.S. government.

At the same time, Katainen offered an unabashed defense of the liberal economic order that the EU stands for, calling the bloc a “trade superpower” that will embrace overtures from economic partners elsewhere since Trump’s surprise election victory in November.

“We have been happy to see that, during the last couple of months, many of those countries with whom we have negotiated and with whom the negotiations have been very, very slow have indicated they want to speed up the negotiations and get good agreements done with the EU,” he said. “The EU will do everything in order to materialize and capitalize on this political moment. It’s in our DNA to support freer world trade.”

After sealing a landmark free-trade agreement with Canada, the EU is seeking to make progress on a slew of commercial goals ranging from the upgrade of a longstanding accord with Mexico to the completion of four years of talks on a deal with Japan.

Other initiatives include slow-going or stalled negotiations on free-trade pacts with India, South America’s Mercosur bloc and the Gulf Cooperation Council, and on an investment accord with China.

Katainen stressed the prospect of improved EU ties with China, which has clashed with Europe over trade issues including Chinese shipments of steel and export restrictions on raw materials.

“It’s our intention to speed up our investment-agreement negotiations,” he said. “I think the relationship between Europe and China will deepen.”