EghtesadOnline: The exact dollar value of Saudi Aramco may be up for debate, but the listing of the world’s biggest company will be priceless for the kingdom’s markets.

The highly-anticipated share sale has become emblematic of Saudi Arabia’s push to transform its economy and open its doors to more foreign capital. Whatever you think of the valuations involved -- be it the $2 trillion once suggested by Crown Prince Mohammed bin Salman or the $400 billion estimate said to have been made by consultant Wood Mackenzie Ltd. -- the offering has the potential to make waves in markets from Tokyo to Toronto, according to Bloomberg.

Aramco’s “partial privatization will bring much attention on Saudi Arabia,” said Michael Bolliger, the Zurich-based head of emerging-market asset allocation at UBS Wealth Management, which has clients worth $2.1 trillion. “As part of a broader privatization program of state-owned companies, it reinforces the message that the kingdom’s strategy is to develop a domestic capital market and gradually open it up to international investors.”

Here’s a look at how Aramco’s listing may impact markets:

Saudi Arabia’s domestic stock exchange, known as the Tadawul, has a total market capitalization of about $440 billion, making it the largest in the Middle East. A sale of just 5 percent of Aramco could raise more than $100 billion, according to some estimates. That would crown it as the biggest listing ever but also mean absorption of the whole deal on the local exchange would be near impossible. 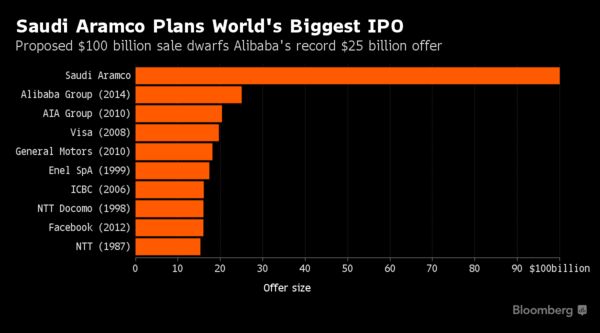 Throw in the shortage of foreign participation in the Tadawul -- overseas investors account for about 4 percent of ownership -- and Saudi Arabia has little choice but to share the Aramco listing with at least one international partner.

Singapore, the biggest oil-trading center in Asia, is so keen to host the listing that it is considering inviting one of its state investment companies to become a cornerstone investor in the initial public offering, according to people familiar with the matter. The country is also looking at cooperating with the Saudi government on future investments, they said.

Aramco officials have also received pitches on a potential Hong Kong listing, which could come with anchor investments from deep-pocketed Chinese funds. Executives at Aramco have mentioned the possibility of listing in London, New York, Tokyo or Toronto.

The largest IPO in history will have an impact even beyond where it’s listed, rippling through the benchmark stock gauges tracked by investors globally. 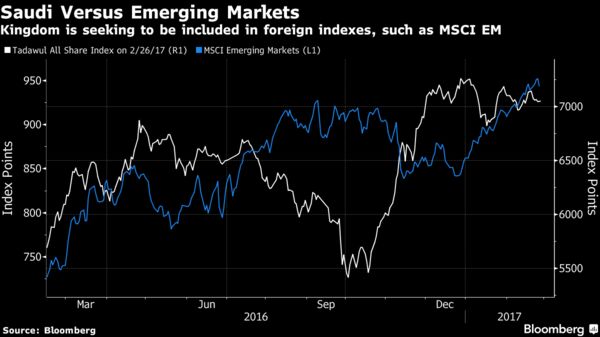 Assuming a 5 percent float, Aramco alone would account for about 2.4 percent of the gauge, according to estimates by Mohamad Al Hajj, a Dubai-based equity strategist for the Middle East and North Africa at EFG-Hermes Holding. That would be enough to propel it into the top five companies by weighting alongside Samsung Electronics Co. and Alibaba Group Holding Ltd.

Aramco’s listing would almost double Saudi Arabia’s presence in the benchmark measure, which would be about 2.8 percent based on the Tadawul currently. The inclusion of the oil-giant would lead to passive inflows of $6.6 billion from MSCI trackers, and $2.5 billion from FTSE investors, Al Hajj estimated.

Saudi Arabia, the world’s largest oil exporter, told OPEC earlier this month that it cut crude production by the most in more than eight years. The key to Aramco’s IPO price -- and the success of its offering -- will be the value of crude. Even with the global shift to cleaner fuels, oil is expected to continue providing about a third of world energy for the next two decades. 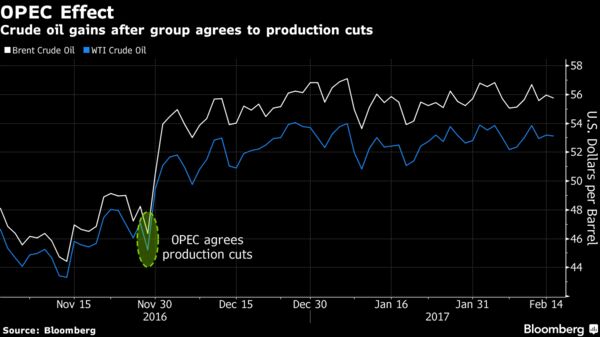 Forward contracts for the Saudi riyal have emerged as the place to bet against the country’s more than three-decades old peg to the U.S. dollar. Foreign reserves held by the Saudi Arabia Monetary Agency have dropped more than $200 billion since August 2014 to $528 billion at the end of December, as the kingdom used savings to shore up public finances. 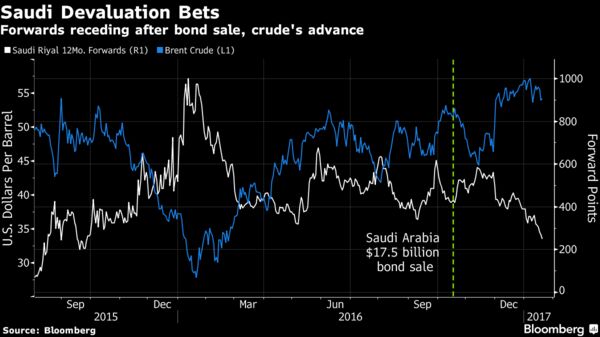 Raising $17.5 billion in its debut sovereign bond sale helped cut the one-year forwards to the lowest level in 18 months; expect the influx of Aramco cash to deter further bets against the fix.

Aramco’s listing could also filter into the kingdom’s financial system. The three-month Saudi Interbank Offered Rate, used by lenders to price loans and a key gauge of stress, climbed to the highest since the global financial crisis in October. 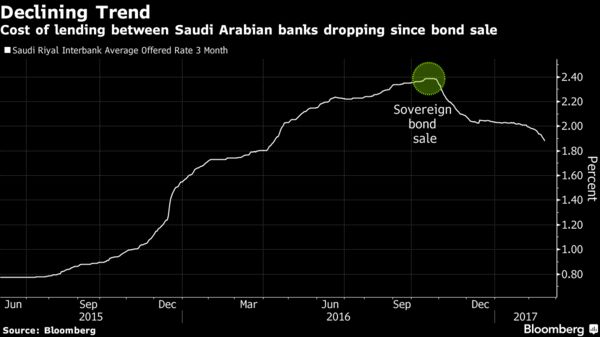 Following the country’s bond sale -- a record for an emerging-market nation -- it has been declining. Aramco’s share sale is likely to flood the kingdom’s banks with liquidity, further depressing the measure known as Saibor.