EghtesadOnline: Equities rallied in the last half-hour of trading Friday to recover losses from earlier in the session, as investors set their sights on U.S. President Donald Trump’s speech before Congress next week. Gold extended its strong run as the dollar turned lower.

The Dow Jones Industrial Average, which closed up 0.05 percent, has now hit daily highs for 11 consecutive sessions, its longest streak of records since 1987. The S&P 500 Index and Nasdaq Composite Index also finished higher, while the Russell 2000 Index lost ground, according to Bloomberg.

“Markets are pricing in the Trump agenda and they’re pricing in lot of high expectations,’’ Stephen Wood, chief market strategist for North America at Russell Investments in New York, said by phone. The firm oversees more than $258 billion. “The likelihood that there are going to be some legislative and political bumps on the road is certainly very high. A rally predicated on political policy can expect some volatility within it.’’ 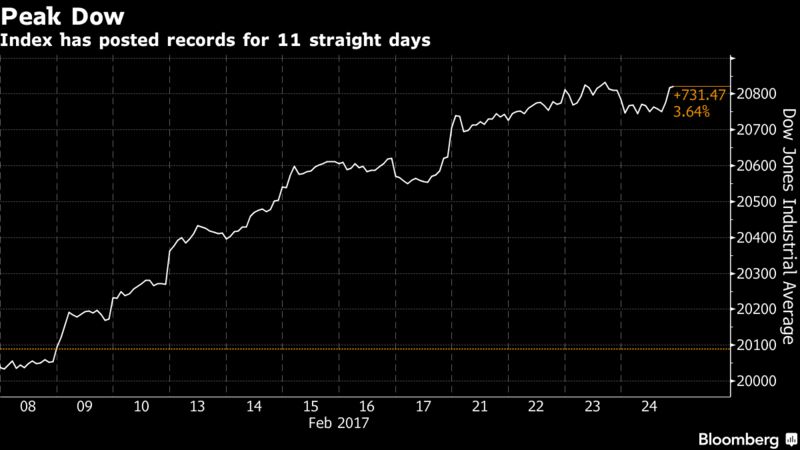 Gold rose for a fourth week after U.S. Treasury Secretary Steven Mnuchin said Thursday that he expects low borrowing costs to persist, sparking a drop in the dollar. Oil pared a weekly advance, while silver headed for the longest run of weekly gains since 2006.

The rally in global equities that helped push their value above $70 trillion is losing momentum as money managers grapple with political uncertainty and the Federal Reserve’s schedule for lifting borrowing costs. In Trump’s address before a joint session of Congress on Feb. 28, the president is expected to lay out his plans for tax and health care reform and infrastructure spending.

With all the uncertainty surrounding the administration’s programs, the equities markets are taking a wary stance heading into the weekend before the speech.

“There have been some hints about the type of corporate income tax reform that the administration might deliver – a broadening of the base and cuts to the tax rates – markets are still waiting for the 2017 key draft fiscal budget,” researchers at Barclays Plc including chief U.S. economist Michael Gapen wrote in a note Friday. “We think that the presentation to Congress will be a good opportunity for the president to more clearly flesh out his policy priorities and goals, especially on trade, taxes, and public investment.”

What traders are watching for: