EghtesadOnline: Gold bulls are acting as if they can’t believe a good thing when they see it. They should’ve had more faith. Hedge funds reduced their wagers on a bullion rally for the first time in three weeks, just before prices neared a two-month high and capped a third straight week of gains.

Not even Federal Reserve Chair Janet Yellen’s outlook for higher U.S. interest rates has been enough to disrupt the gold party. Investors snapped up the metal as a store of value amid concern that President Donald Trump’s fiscal policies will bloat government debt. There’s also anxiety over anti-establishment candidates in this year’s elections in the Netherlands, France and Germany, who favor exiting the European Union, according to Bloomberg.

“Any indication that there could be more exits from the EU could make money come into gold -- any sign of potential European instability,” said Walter “Bucky” Hellwig, who helps manage $17 billion as senior vice president at BB&T Wealth Management in Birmingham, Alabama. “There are also concerns about the U.S. deficit because Trump’s fiscal policy is going to be very aggressive, and that could also benefit gold.” 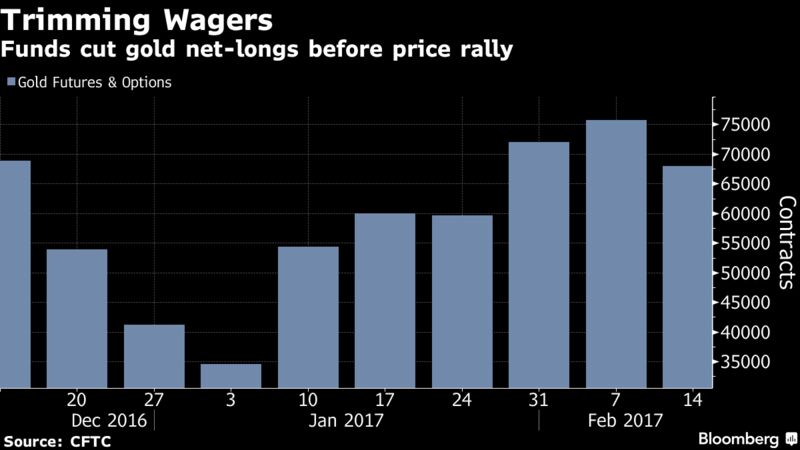 Funds reduced their gold net-long position, or the difference between bets on a price increase and wagers on a decline, by 10 percent to 67,982 futures and options contracts in the week ended Feb. 14, according to U.S. Commodity Futures Trading Commission data released three days later. The wagers are still up about 65 percent this year.

Investors don’t seem convinced that Yellen will follow through. Fed fund futures data on Friday showed bets reflecting a 34 percent chance of a rate increase in March. That was unchanged from Feb. 14, the day of Yellen’s Senate testimony. Gold traders and analysts surveyed by Bloomberg remained bullish on the price outlook for an eighth week, the longest run in data going back to April 2015.

Even if borrowing costs do move higher, the market has already priced it in because they’ve been well-warned by the Fed, said Chris Gaffney, the president of world markets at EverBank. Any dip in prices caused by the Fed raising rates next month would be temporary and could be a buying opportunity, said Suki Cooper, an analyst at Standard Chartered in New York.

Gold could rally to $1,300 in the second or third quarter, should anti-EU candidate Marine Le Pen win the French election, spurring demand for a haven, Citigroup Inc. analysts wrote in a note Feb. 8. Political uncertainty both in the U.S. and Europe adds to the argument for owning gold, Russ Koesterich, who helps manage the $41 billion BlackRock Global Allocation Fund, said in an interview Thursday.

ETF investors are already hoarding gold in Europe. Seven of the 10 precious-metal ETFs that have attracted the most money this year are in Europe, with Frankfurt-listed Xetra Gold drawing $1.6 billion, almost double the $894 million that piled into its biggest rival, New York-listed SPDR Gold Shares.

Hunger for bullion is so strong that purchases of ETFs backed by gold last year eclipsedbuying by the world’s central banks, the biggest holders of the metal, for the first time since at least 2010.

Still, there are troubles for gold in the physical market. Imports by India, the second-largest consumer of the metal, fell 28 percent to 58.6 metric tons in January from a year earlier, according to a person with knowledge of provisional Finance Ministry data, who asked not to be identified as figures aren’t public yet.

And gold’s gains have started to slow. Prices climbed 0.3 percent last week, after jumping 3.8 percent in the prior two weeks. The dollar’s 0.5 percent rebound in February has crimped some demand for bullion as an alternative asset, and the greenback’s gains could accelerate if Yellen sticks with her rate plan.

“The debate is turning to the timing of those hikes,” said Maria Smirnova, a Toronto-based portfolio manager at Sprott Asset Management, which oversees C$9.3 billion ($7.1 billion). “We had a good rally in the last two months, and we’re just taking a breather right now.”