EghtesadOnline: The oil-trading boom that cushioned the profits of Royal Dutch Shell Plc and BP Plc through the price slump of 2015 and early 2016 is over.

BP said on Tuesday it made a "small" loss trading oil in the fourth quarter, while Shell last week said trading profits "flattened" in late 2016. The fall off in trading contributed to worse-than-expected fourth-quarter profits at Europe’s largest oil and gas producers.

Although better known for their oilfields, refineries and gas stations, Shell and BP are the world’s top energy traders, handling about 20 percent of global oil demand between them and dwarfing independent trading houses such as Vitol Group BV, Trafigura Group and Glencore Plc, Bloomberg reported.

Oil traders thrived in 2015 and 2016 by taking advantage of an oversupply that led to an unusually strong contango market structure -- where contracts for future delivery trade higher than spot prices. The contango allows traders to buy oil cheap, store it and profit later by locking in their profit through derivatives in so-called "cash-and-carry" deals. 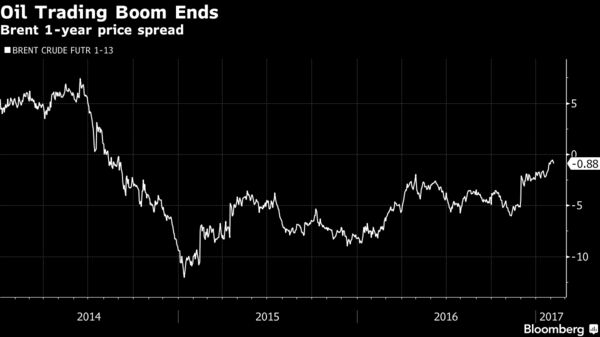 As onshore depots filled up over the last two years, oil traders relied on supertankers for "floating storage" deals, at times anchoring ships for months in natural ports or near trading centers like Singapore.

The contango has narrowed sharply since the Organization of Petroleum Exporting Countries and Russia cut production. The price difference between Brent crude for immediate delivery and the one-year forward dropped to a contango of $0.52 a barrel on Friday, the narrowest since September 2014 and well below the 2015 peak of $12 a barrel.

Oil traders predict the market could flip later this year into the opposite condition, backwardation, where prices for immediate delivery trade at a premium to forward contracts. The oil curve is “flat as a pancake,” Gilvary said, using an expression from his days as head of trading at BP. While contango opportunities no longer exist in crude trading, some remain for gasoline, he said.

Oliver Wyman, a consultancy that publishes a benchmark annual review of the commodities trading industry, said the trading arms of BP and Shell enjoyed in 2015 their best year ever thanks to "low, volatile spot prices that created cash-and-carry opportunities."