EghtesadOnline: China’s doors to foreign investors may be opening ever wider, but that’s not enough for many worried about finding an exit.

According to Bloomberg, fourteen months after qualifying for official reserve-currency status, and after a series of steps opening up domestic markets to overseas funds, the take-up remains below estimates. For all China’s attraction as the second-largest economy with large and expanding domestic capital markets, regulators’ efforts to tamp down on outflows of money have stoked concerns.

"There’s no return lower than not getting your money back," Brad Holzberger, chief money manager of QSuper Ltd., an Australian pension fund that oversees the equivalent of $47 billion, said in a Jan. 13 interview. “We’re worried about understanding the transparency of decision making -- as well as property rights, rule of law, transmission of capital controls and those sorts of things.”

It’s another case of China’s conflicting goals, alongside the Communist leadership’s pursuit of both growth and leverage reduction across the economy. By taking increasingly aggressive steps to curtail domestic money from flowing abroad -- such as more stringent vetting of cross-border transactions -- regulators are effectively counteracting market-opening steps that have included allowing all types of medium to long-term investors into the interbank bond market. 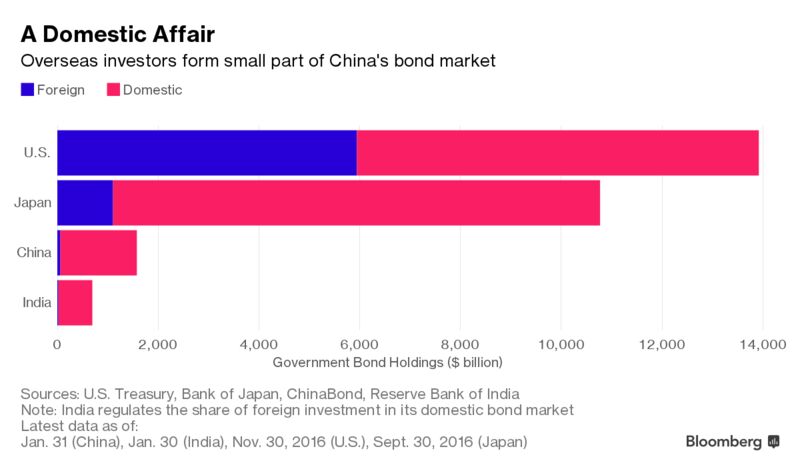 In a sign of how far China has to go to stoke appetite for its assets, Australia’s QSuper is happy to put money into Brazil -- an emerging market with a turbulent financial past that’s featured bailouts from the International Monetary Fund -- but not China.

“There’s too much discretion by the policy makers, giving foreign investors a lack of a rule-based system,” said Shen Jianguang, chief Asia economist at Mizuho Securities Asia Ltd. in Hong Kong, who previously worked at the IMF and European Central Bank. "It’s not a very favorable signal" to implement curbs on money leaving the country, he said. But "for Chinese authorities, the priority is to prevent a financial crisis."

The State Administration of Foreign Exchange, or SAFE, actively protects the legitimate rights and interests of foreign enterprises, the agency said. Dividends and profits can be transferred without restriction, SAFE said. Foreign-invested groups can also transfer shares and withdrawals from banks, with the authentic and complete documents required, it said.

Broader participation by foreign investors in Chinese markets could help balance its capital flows, offsetting moves by domestic funds and households to diversify some of their holdings overseas. That in turn could reduce longer term downward pressure on the yuan, which slid the most against the dollar last year in more than two decades.

In a chicken-and-egg situation, more balanced flows would also give regulators space to follow through on the goal set in 2015 to make the yuan convertible by 2020.

For now, while the inflow of foreign funds shows impressive growth rates, the data are flattered by low starting points. Relative to other big economies, foreign participation in China’s financial markets remains limited.

Overseas holdings of Chinese shares rose 41 percent last year to 649 billion yuan ($94 billion) -- less than half of what Norway’s sovereign wealth fund alone holds in American equities as of September. China has expanded access for global funds to its onshore equities, launching two stock exchange links with Hong Kong since 2014. 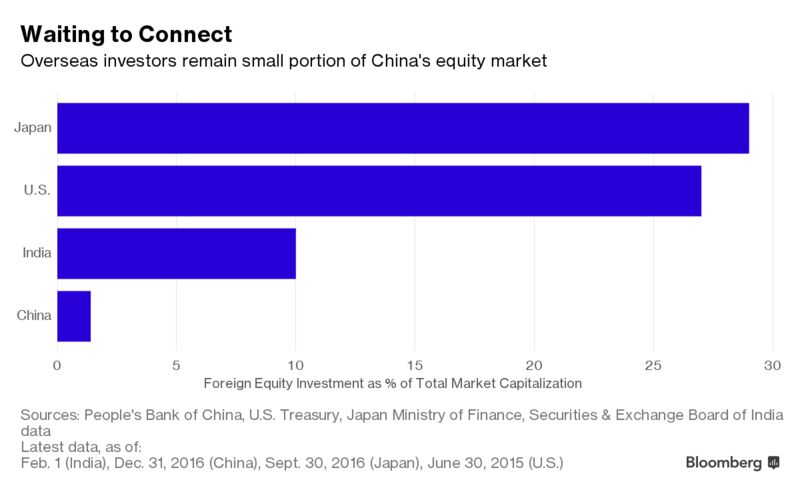 Overseas investors in January were net sellers of Chinese bonds for the first time since October 2015, which was a month before the IMF gave approval to the yuan to join its Special Drawing Right basket of official currencies.

Even so, some foreign investors see curbs on outflows as a worthy price to pay for currency stability. After what Bloomberg estimates as $1.6 trillion left China from 2015 through last November, the latest indicators suggest a slowing in the outflows. Data due Tuesday may show foreign-exchange reserves fell $7 billion in January, the least since July, to $3.0035 trillion, according to the median in a Bloomberg survey of analysts. Along with dollar weakness, outflow curbs have helped the yuan rebound 1.2 percent so far this year.

“More barriers on capital flows always make it more difficult for investors to know what the real price of the currency is,” said Rajeev De Mello, head of Asian fixed income in Singapore at Schroder Investment Management Ltd., which has onshore Chinese bonds among its holdings. “That’s what keeps the market calmer though. They don’t have too many policy choices right now.”

One concern De Mello does have is the cost of hedging his China holdings. Moves by China to squeeze speculation in the offshore yuan market, part of officials’ efforts to avert continual declines in the exchange rate, have involved big swings in money market rates, making it costlier to hedge. China is still in the process of developing an onshore market where all foreign asset managers can hedge.

Another worry among some investors abroad is anecdotes they hear about others having difficulty getting money out.

One case involving a regulator’s reported discussions on a withdrawal of funds was linked to Deutsche Bank AG. When the German lender was selling its stake in a Chinese bank, SAFE proposed that the proceeds be remitted in batches, rather than in one go, Bloomberg News reported in September, citing people with knowledge of the matter. SAFE said that media accounts of its talks with Deutsche Bank were untrue.

Also limiting foreign appetite is China’s continuing exclusion from major global indexes -- a reversal of which could see as much as $180 billion go onshore, according to HSBC Holdings Plc estimates. A senior official at China’s securities regulator has said the nation is in no rush to win inclusion into an MSCI stock-index and entry into bond indexes isn’t a priority.

The conclusion of Song Yu, the top forecaster for Chinese economic indicators since 2012: rising concerns about tightening capital controls are offsetting the benefits of policies encouraging foreign investment.