Look at debt levels, demographics and inequality instead

Everything You Thought You Knew About Bond Yields Is Wrong: HSBC

EghtesadOnline: It's an article of faith in the credit markets that certain fundamental forces propel the yields on government debt, specifically economic growth, state spending, inflation and central bank guidance.

"We show that many of the common rules of thumb or ‘heuristics’ that are applied to bond yields are simply false," Major wrote in a client note this week.

Major and his team believe that while Treasuries reflect key economic data, it's not clear that they're still the principal drivers of yields.

The report also defends Major's eye-catching prediction last November that 10-year Treasury yields will hit 1.35 percent at end of 2017, compared with the median forecast of 2.75 percent in a Bloomberg survey.

Take a look at what Major and his team consider four common misconceptions cited by bond bears.

1. Bond yields dance to the beat of nominal economic growth

Surprisingly, there isn't a strong long-term correlation between the movement of Treasury yields and U.S. economic momentum before inflation, as seen in the weak relationship between growth surprises and changes in 10-year yields relative to their forecasts. 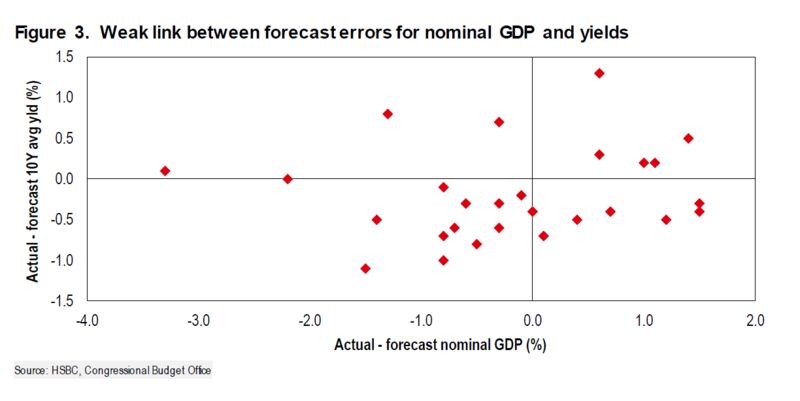 It's not clear that Treasury supply dramatically affect yields, as evidenced by the weak relationship between year-over-year changes in debt-to-GDP levels and the five-year, five-year forward inflation rate. 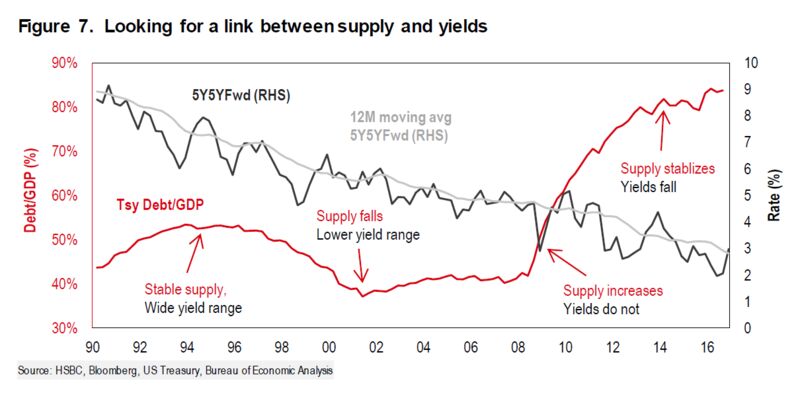 The forward market has consistently projected lower rates than the Federal Open Market Committee in recent years. "It is a myth that the FOMC has been guiding rates lower," Major writes. "The Fed had to revise its hawkish rate forecasts over time. In doing this, it was following the market’s lead."

The commonly-cited relationship between inflation surprises and shifts in nominal yields over the long-haul -- price pressures, after all, reduce the real value of bonds -- is hard to garner from the data, according to the analysts. Instead, investor expectations for long-run nominal growth drive long-term yields.

"This need not mean that bond yields consistently react to surprises in the high frequency data over short-term horizons," Major and team write. But it's not clear that the annual change in the 10-year note is tied to inflation's year-on-year momentum. 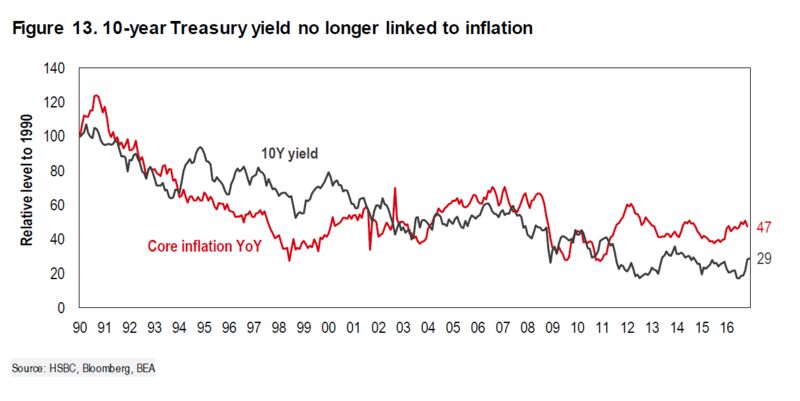 While Major's views swim against the tide, the findings caution against overstating the impact of fiscal and monetary data on long-term bond yields.